The old Beijing Boak is causing a few serious headaches for untrustworthy Police Scotland.
They are in total disarray about how they should go about policing the many public protests we’ve seen in Scotland during lockdown restrictions.
We’ve had BLM protests, anti-lockdown protests, “sack the manager” gatherings at Celtic park, women’s rights protests, Rangers fans gathering to shout that they won a cup, plus a number of other various gatherings and protests about, well, this, that, and the other.
Police say they are in a very difficult position and are caught between a rock and a hard place. They are trying to protect the wider public from these super-spreader protests and gatherings, while at the same time trying to respect the public’s right to peaceful protest.
Many people feel sorry for Police Scotland.
But I’m not one of them.
In fact I’m sitting here laughing my bahookie off at the predicament these neanderthal half-wits in Police Scotland have got themselves in to.
And here’s why.
You see, Police Scotland are supposed to be, in essence, citizens in a uniform. They police by consent of the public. Their job is to help, support and protect the public. They are public servants.
But when the old Beijing Boak hit us early last year, untrustworthy Police Scotland couldn’t wait to jump on the new powers the politicians offered them to go stop, fine, arrest, and jail members of the public for breaking rules and committing crimes such as buying an Easter egg or sitting alone on a park bench with a cup of coffee (apparently if the coffee is warm it’s “a picnic” so there you go...nick nick)!
Untrustworthy Police Scotland were literally ‘slaeberrin’ at the mooth’ at the thought of these new extra powers.
So much so in fact that they just couldn’t wait to nail their colours to the mast and become enforcers for the Scottish government.
But they forgot about one wee thing.
They’re not supposed to be enforcers for politicians.
They’re supposed to work for the Scottish public, not politicians.
So now we see groups of protesters (made up of members of the public) protesting almost weekly about one thing or another, and police scrambling around like headless chickens, totally clueless about what to do about it.
If they arrest the protesters for breaching the Beijing Boak restrictions they are acting as enforcers for the politicians. They are targeting the public, the very people they should actually be protecting.
And if they DON’T arrest the protesters they get accused of allowing people to break the law.
Damned if they do, damned if they don't.
And I love it.
I’m sitting here in hysterics watching them running around like keystone cops.
Because the new lockdown laws and powers that untrustworthy Police Scotland so eagerly welcomed with open arms last year have now come back to haunt them in spectacular style.
No wonder the Scottish public are of the opinion that Police Scotland can go stick their truncheons where the sun don’t shine. 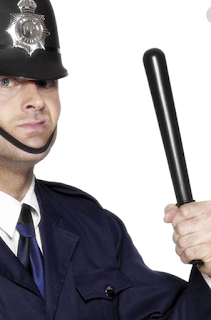