This is the shocking story that Police Scotland's patrol cars are being held together by 'duct tape'.

This is a terrible waste of duct tape and I must protest most strongly.

The 'duct tape' would be far more usefully employed if they would use it to tape over the mouths of all those lying Police Scotland officers who, every day, take an oath to tell the truth in the witness stand yet then proceed to lie through their teeth in courts of law up and down our country (read my shocking story about a police officer lying under oath here). 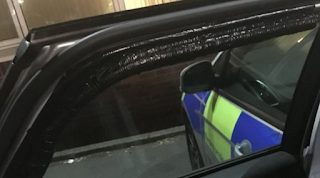