Top Legal Experts All Claim COPFS Is A Mess

I have already stated in a previous post that the Holyrood justice committee's current inquiry and investigation in to the Crown Office & Procurator Fiscal Service is unlikely to make any difference whatsoever to the way this corrupt, inefficient, and incompetent motley crew of rogues run themselves.

And now it's not only me who's calling their investigation a waste of time.

A host of top Scottish lawyers are saying so too, many of whom have come out and said it publicly (which is unusual, perhaps even unprecedented, but never the less, very, very welcome):

- The Faculty of Advocates have expressed concerns about the "decision-making processes" of a "struggling" prosecution service. Roughly translated, the COPFS pursue stupid non-winnable cases where people are quite obviously innocent (like in my case) yet won't pursue other cases where it's as plain as the nose on your face that there has been obvious wrong-doing (like in the Glasgow bin lorry tragedy).

- Brian McConnachie QC, a former senior prosecutor at Crown Office, has said: "there are cases that are not being properly prepared, cases having to be put off on numerous occasions because COPFS has had trouble finding witnesses or providing full disclosure to the defence."

- Advocate Niall McCluskey says "There are huge delays in fixing high court trials as the court service doesn’t seem to have enough resources, while on the defence side, legal aid is also under-resourced"

- Gordon Jackson QC has said "the decision-making processes are not as good as they once were".

That's pretty damning conclusions from some very top people who are right up there in the know. 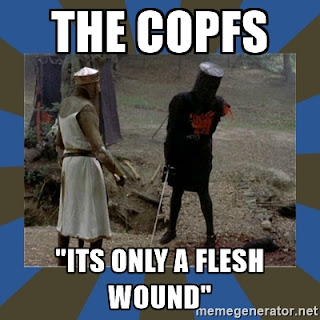 But, as you would expect, the corrupt Crown office see it a wee bit differently (surprise, surprise).

In yet another of their bizarre 'the emperor has no clothes' scenarios, a spokesman for the Crown Office said it looked forward to:

"working with the committee" to highlight COPFS "strong track record in prosecuting crime in Scotland".

Someone at the Crown office is having a laugh surely.

I'm reminded of the Monty Python movie where the Black Knight has his limbs chopped off one by one yet still maintains "it's only a flesh wound". This describes EXACTLY how the Procurator Fiscals in the Crown office see themselves.

I'll leave the final word to Brian McConnachie QC who, in his analysis of the Crown office's situation, states that the current investigation in to the Crown office will likely prove to be little more than a "long involved talking shop with very little impact".

Unfortunately for the Scottish public, you just know that even after this investigation it will still end up being business as usual at the corrupt, incompetent, totally blinkered, and unflinching Crown office.

http://www.heraldscotland.com/news/14736437.Lawyers__Crown_Office_probe_should_look_at_pressures_on_entire_legal_system/?ref=rss
Posted by Kenny Campbell at 15:39