No Investigation In To Failed £60M Police IT Project

Answer: When that investigation does not, and cannot, hold any party responsible or accountable for their actions.

It's also known as 'a whitewash' and rest assured our good friends in the corrupt Crown office and untrustworthy Police Scotland are seasoned experts when it comes to whitewashing investigations in to their failings.

The so-called 'investigation' I'm referring to here is of course the predictable news that Audit Scotland will conduct a so-called independent review into Police Scotland's failed £60m IT contract.

In a letter (reprinted below) you can clearly see that the fix is already in and the whitewash has begun even before the investigation has gotten underway!

Note the phrase in the last paragraph where it says that the Audit Scotland investigation will take the form of an "Independent Lessons Learned Review".

'Lessons learned' really means that the investigation will be restricted to only looking at how Police Scotland can prevent such expensive failures from happening in the future.

Yip, close ranks, give the 'illusion' that an investigation has been carried out, and ensure no-one gets held responsible.

Just the way untrustworthy Police Scotland like 'independent' investigations to be... 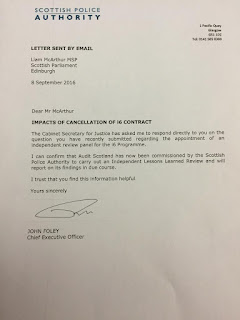 http://stv.tv/news/politics/1366423-probe-after-police-scotland-cancels-60m-it-contract/
Posted by Kenny Campbell at 13:22