Honest Decent Coppers Are Scared To Speak Up

A senior police officer with many years service has just blown the whistle on how drug dealers are getting away with it and avoiding arrest.

It turns out that in an effort to save money, police officers are told NOT to investigate and arrest drug dealers if it entails working overtime to do it (see letter below). 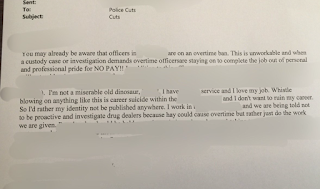 As you can imagine, the big story here as far as the mainstream press are concerned is that drug dealers, the scourge of our society, are getting away with their crimes because police are trying to save money by restricting officers to a narrow time-window in which they can investigate and arrest these pieces of scum.

The story becomes even more shocking when you consider that the number of drug-related deaths in Scotland has jumped 15% in the last year.

But as my regular readers know, I like to look beyond the obvious. I like to check the background and read between the lines of a story as it were. And with this story my attention was particularly drawn towards one little phrase the whistle-blowing senior police officer used in his letter.

He asked to remain anonymous because whistle-blowing about the police is akin to "career suicide".

That's the much bigger story here as far as I'm concerned.

There are not many good coppers kicking around untrustworthy Police Scotland these days, and the ones who are good, honest, decent coppers know all too well that if they try to do the right thing their career will be effectively over ie they'll be committing 'career suicide'.

You'll never get anywhere in Police Scotland if you are honest and above board - the whistle-blowing senior officer is very clear about that (and in my extensive experience of dealing with police he's absolutely correct).

Police Scotland is an organisation which discourages honesty, fairness, and decency.

And that's as bewildering as it is disgraceful.

Shame on you Chief Constable Phil 'Gormless' and your abysmal motley crew.