Lord Advocate James Wolffe Refuses To Give Back Property He Stole 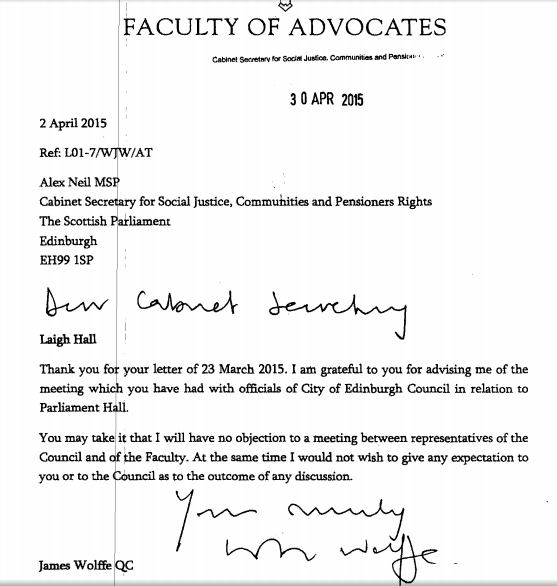 Let's be clear about one thing.

Public buildings belong to the public, no-one else.

The Parliament Hall building in Edinburgh belongs to the people and the common good fund. The people built it, they paid for it, it's ours, it belongs to us.

The Faculty Of Advocates - under the stewardship of new Lord Advocate James Wolffe - had no right to steal it from the people and transfer the deeds in to their own name.

If the Faculty Of Advocates had a shred of integrity they would give it back to the people immediately.

Above, I've published a letter - obtained through Freedom Of Information - written by our new crooked Lord Advocate in which he agrees to a meeting with Edinburgh Council to discuss the matter.

The letter is every bit as alarming as it is curt and arrogant.

In it James Wolffe says: "I would not wish to give any expectation to you or to the council as to the outcome to any discussion".

Not even an idiot can misinterpret exactly what James Wolffe is saying here.

It's nothing but flowery double-speak language telling us, the public, to get lost - he's not giving it back.

And this concerns me greatly.

Because the Lord Advocate works for us, the people, and everything he does should be for the public benefit.

Yet here we have the new Lord Advocate James Wolffe exposed for all to see as a man who has stole one of the most historic, prestigious, and expensive buildings in the country from the public, and when we, the public, DEMAND he gives it back to us, he tells us where to go in no uncertain terms.

The sheer arrogance of the man is breathtaking.

So do you trust the new Lord Advocate James Wolffe to run the Crown office and work for the public's benefit?

Do you believe he's a man of the people and for the people?

Do you think he'll work tirelessly for the people of Scotland in his role as head of the Crown office and act in the public's interest for the public good?

I know what I think.

The man is a disgrace.

He should resign immediately and hang his head in shame.

This new Lord Advocate is nothing more than a crooked establishment figure who will work for his political and corporate masters (and himself), and not the public. He's a friend of the establishment and an enemy of the people.

So remember this the next time a Procurator Fiscal from James Wolffe's corrupt Crown office asks you for your help.

Remember this the next time untrustworthy Police Scotland ask you to appear in court on behalf of the Crown as a prosecution as a witness.

I continually call out the Crown office in this blog as being a corrupt organisation who claim to work for the public while secretly seeking to harm us.

My opinion of them has not changed.

The appointment of new Lord Advocate James 'the big bad' Wolffe has not and will not change a single thing in the way this already corrupt organisation operate.

In the letter above James Wolffe clearly tells the public we can dispel any expectations of him giving Parliament Hall back to the people.

We, the people of Scotland, can similarly dispel any expectations that this new Lord Advocate will be any friend of the Scottish public.
Posted by Kenny Campbell at 12:42