Arrested For Being An Idiot

A man from Coatbridge in Lanarkshire has been arrested by police and is to be charged with putting a video on social media of a dog sitting in front of the TV watching a programme about Hitler while making a Nazi salute.

The dog was making the salute by the way, not the man.

I'm guessing murders, rapes, assaults, and burglaries were all put on hold that day while Deputy Dawg aka DI David Cockburn and his team of Nazi hunters from Police Scotland leapt in to action to arrest the man.

DI Cockburn has been quoted as saying: "This clip has been shared and viewed online, which ultimately has caused offence and hurt to many people in our community".

I find it every bit as distasteful and offensive as he does.

A spokeswoman for the Scottish Council of Jewish Communities told the Daily Mirror that "anti-Semitism is not a joke and is a form of racism which needs to be condemned".

I agree with her too.

But for goodness sake did we really need to use up so much valuable police time and resources to arrest and charge this guy and send the case to the Procurator Fiscal?

With the advent of cable and satellite TV there does seem to be no end to all these Hitler type documentaries on our screens - the history and discovery type channels seem to repeat them on a loop.

There's no doubt this stupid guy thought it would be highly amusing to get a vid of the dog, paw in the air, sitting in front of the telly during one of them.


I don't think it's amusing.

I think it's stupid.

I forgive the dog, but I think the guy is an idiot.

But is he a criminal?

Even the arrested man is quoted as saying in the video "My girlfriend is always ranting and raving about how cute her dog is so I thought I would turn her into the least cute thing you could think of which is a Nazi".

Sorry folks but that comment above even on it's own shows that police were NOT dealing with some stereotypical right-wing tattooed skinhead type who spouts vile hate and tries to corrupt the public by disseminating hate speech, but rather a bit of a numpty fae Coatbridge playing a very distasteful prank on his girlfriend - which he was too stupid to realise would offend so much.

It is what it is.

I'm absolutely convinced a stern warning from Police Scotland would have been suffice to have done the job.

Or perhaps it's just that acting like a Nazi strikes a little too close to home for Police Scotland officers. 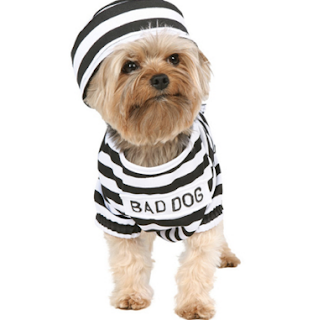 But if you're really that offended DI Cockburn and absolutely must arrest someone - arrest the dug.