The Police Are Getting Younger

Meet the latest recruit to Police Scotland and the only police employee this blog is ever gonna fall in love with. 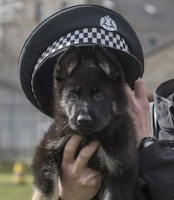 He's a 7 week old German Shepherd...and quite frankly he's way too cute for his own good. Just look at that wee face!

And I'm sure his arrival has been a welcome boost for the failing Police Scotland PR team who have been struggling to get anything positive in to the press for years.

But, as is always the case with untrustworthy Police Scotland, there's always a darker and murkier side to everything they do - even when they're flaunting pics of a cute little puppy in a police hat.

You see, Police Scotland have named the puppy "Bodie".

Younger readers won't be old enough to know the significance of this name, but I do.

In the late seventies and early eighties one of the most popular TV shows of the era was an ITV program called "The Professionals". It was a one hour police type drama about a fictional government security agency called CI5 - a bit of a play on CID and MI5.

Anyway, the two stars of the show were called Bodie and Doyle.

Bodie was a party animal and notorious womaniser with a hard-man image who enjoyed football and drinking and was entirely happy to break the law as long as it got him a result.

Now I've got nothing against Bodie the puppy. I think he's adorable and I wish him a long and distinguished career.

I just wonder why Police Scotland would be so impressed with a hard man who beats people up and breaks the law that they'd want to call one of their police dogs after him?

It pretty much tells us all we need to know about how Police Scotland view themselves.

As for me, I think "Dixon" would have been a better name for the little puppy.

"Dixon Of Dock Green" was an old seventies TV program too.

However Dixon was a good law abiding copper who stood up for all things honest, fair, and decent in our society.

He helped, supported, and protected the public.

And that sort of thing just doesn't resonate with untrustworthy Police Scotland.
Posted by Kenny Campbell at 18:55