The Incompetence Of Motherwell Police

When William Linton, 25, got dumped by his girlfriend he decided to take action to impress her and try to win her back.

So what kind of theatrics did young William get up to in order to try and impress the ex burd?

Well, for starters, he smashed the window of a police patrol car, defaced their notebooks, and stole a set of handcuff keys.

But that's not all.

With the aid of a cleaner who kindly opened the main door of the police station when he buzzed, he was able to walk right in to Motherwell Police Station, get in to an unlocked CID room and take pictures of himself sitting behind a senior officers desk wearing a police hat after rifling through a pile of confidential files and paperwork.

Oh, and he had a good 4 hours in there to do it all before finally being disturbed!

This is VERY embarrassing for Motherwell police.

While I most certainly do not condone what William Linton did, I'm never the less very happy this incident occurred.

The reason I'm very happy this incident occurred is because it has served to alert us to various security holes at the Motherwell station, which is one of our major police divisional headquarters.

It gives our police an opportunity to review and fix those security breaches so that this kind of thing can never happen again.

OK, so I admit, it's no secret that I have had considerable experience of dealing with a number of police officers based at Motherwell police in the past and I have found them ALL to be extremely arrogant, very incompetent, and corrupt. In fact out of all the police officers in all the various police stations in Glasgow I have had the misfortune to deal with, Motherwell police are by far the worst.

But I'm not gloating. 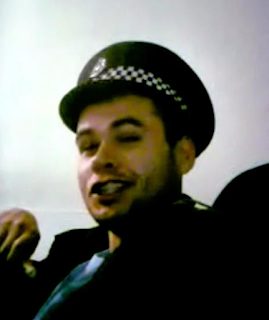 http://www.dailyrecord.co.uk/news/scottish-news/man-broke-motherwell-police-hq-7680073#LwWEMtq0Sw9ZOFhU.97
Posted by Kenny Campbell at 17:44