Police Scotland Found To Be Negligent

The Police Investigations & Review Commissioner (PIRC) has ruled that an incident in which police discharged one of their firearms during a training exercise at a power station was negligent and preventable.

With disasters like the nuclear accident at Chernobyl still fresh on our minds, what the hell were Police Scotland thinking using firearms and live ammunition at a power station?

It adds nothing to an already diminishing public confidence in untrustworthy Police Scotland to know that they can't be trusted with firearms.

The PIRC added that if police practice and procedures had been rigorously followed, the incident (in which an officer tried to unravel the sling of the Heckler & Koch G36C Carbine assault rifle) would not have happened.

It was just luck that no-one was injured and no-one happened to be standing near the wall which one of our bold boys in blue decided to pepper with bullets.

As you would expect, untrustworthy Police Scotland are trying to spin this as being just a 'one-off' incident.

But it has to be said said that the next time I see two armed PC plods like the ones in the picture below strolling along my high street, I'll be running for cover rather than asking them for the correct time... 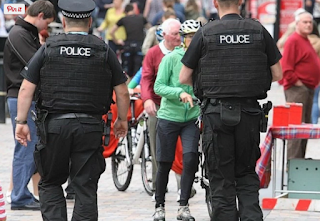 http://www.scottishlegal.com/2016/03/30/pirc-finds-accidental-firearms-discharge-was-negligent-and-preventable/
Posted by Kenny Campbell at 17:41