Despite constant denials by untrustworthy Police Scotland that armed police do not roam our streets on routine patrols, we, the public, still continue to see it happen.

Let's be clear, armed police on our streets has absolutely NOTHING to do with being prepared for any prospective terrorism attack.

Armed police on our streets, on routine patrols, are designed to intimidate the public. End of.

That's right folks, police purposely seek to intimidate the very people they should be working to help, support and protect - us.

Take a look at the armed police in the pic below.

Then look at the ordinary normal members of the public around them. 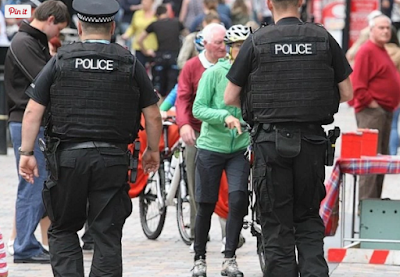 I suppose if I'm being fair, it's probably understandable that the copper to the left would need to shoot criminals with his gun. Because he certainly doesn't look as if he would be able to chase them very far...