There was a minor crash at Trottick Circle in Tayside recently. Nothing serious thank goodness, but a driver fled the scene and had to be chased by police.

Police Scotland won't say whether they caught up the culprit but according to an eyewitness it would be fair to assume they didn't - well certainly not right away anyway.

The the member of the public who witnessed the chase is quoted on his Facebook page as saying "judging by the comical job of trying to chase down the guy who crashed at the Trottick Circle this afternoon, the officers involved in the ‘chase’ were far from fit".

The witness then rated Tayside Division three out of five stars on their official Facebook page.

Tayside police then rated Dunkin' Donuts five out of five stars on their official Facebook page.

OK, ok, I made that last part about rating Dunkin' Donuts up. 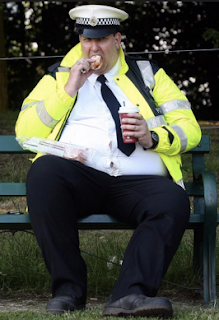 https://www.eveningtelegraph.co.uk/2016/02/23/police-officers-too-unfit-to-catch-man-who-fled-crash/
Posted by Kenny Campbell at 17:42