'Are We Being Served' By Police Scotland?

New chief constable Phil 'Gormless' has visited the north-east of Scotland and praised the officers in that area for the way they have responded to local policing issues. 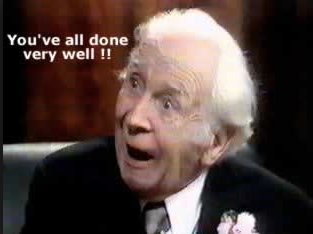 Of course it was nothing but a publicity stunt to try to cover up criticism of the one-size-fits all central police force experiment which everyone (except Police Scotland of course) knows has spectacularly failed - especially in remote areas of Scotland.

It's akin to clueless young Mr Grace in 'Are you being served' visiting the shop floor to tell the staff 'you've all done very well'.

I am reliably informed that while he was there he instructed the doors of all north-east police stations to be decorated with tartan paint, and officers to be extra vigilant during haggis shooting season.

OK, I made that last bit up.

https://www.pressandjournal.co.uk/fp/news/aberdeen/833612/scotlands-new-chief-constable-praises-new-north-east-division-on-first-visit-to-the-region/
Posted by Kenny Campbell at 19:10