The creation of a single national police force in Scotland has been a complete disaster. If you needed any further proof of this, just look at the facts.

Everyone from members of the public to politicians know Police Scotland is a mess. The only people who say it is a success is...Police Scotland.

That tells you everything.

It's simply inconceivable that everyone else is wrong and Police Scotland are right. Especially when they exist to help, support and protect the public and yet we, the public, are screaming at them every day telling them they're just not doing it!

Talk about falling on deaf ears.

Arrogance is a big part of corrupt organisations - and as usual it's the public who lose out.

Everyone with an ounce of common sense knows that Police Scotland was set up to save money and that those cost savings were always going to be at the expense of services to the public.

But many members of the public don't know that the centralisation of Police Scotland was also designed to make individual police officers less accountable to the public. 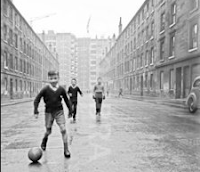 If a wee boy in a wee village playing with a football in the street breaks a neighbours window you don't have to look far to find the culprit.

But if you're in a densely populated, sprawling housing scheme where there are hundreds of wee boys playing with footballs in the street, it becomes more difficult to identify the culprit.

Which is why when you expose, as I did, corrupt police officers in the densely populated, sprawling centralised Police Scotland, they just hide and blame it on others. So the answer you get when you try to expose police corruption in Scotland nowadays is 'it wisnae me mister, big boys did it and ran away'.

That's when you realise that the centralisation of Police Scotland in to one big organisation wasn't only about saving money...it was also about the police being less accountable to us.
Posted by Kenny Campbell at 23:33