The Scotsman newspaper has found out that Police Scotland spent £2 Million on repairs alone to police vehicles. 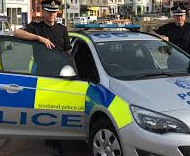 Most of the time the damage was done by plod drivers failing to stop at red lights and exceeding speed limits - something we all see them do regularly. Perhaps they've been watching too many re-runs of The Sweeney on UK Gold (showing my age here lol).

Other repairs that had to be made were also completely avoidable and were caused by, among other things, failing to put on the handbrake and reversing 'negligently' and hitting things. This is basic safety for goodness sake.

In a nutshell, it's not their car so they don't care.

However if you don't take care of your car - if you've got a headlight bulb out for example - expect a ticket from these police hypocrites for your 'negligence'.

According to Margaret Mitchell MSP "the astounding frequency of incidents and the cost of repairs to police vehicles over a relatively short period are staggering".

I know spare parts for a Ford Focus don't come cheap, but come on, £2 Million?

I wonder how many plods own a Ford Focus as their private car? And I wonder how much they spend on spare parts for it - and if they have a buddy in the police vehicle workshops?

http://www.scotsman.com/news/politics/police-scotland-spent-over-2m-on-vehicle-repairs-1-3990575
Posted by Kenny Campbell at 21:55