The Generosity Of Police Scotland 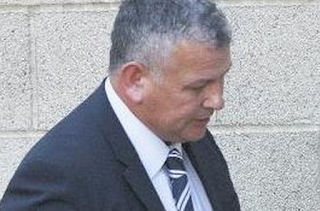 Take a look at the picture of the man on the right. His name is Mr Jim Kerr from Airdrie and he terrorised his neighbours for three years.

This piece of scum assaulted one neighbour and tried to throw him over a fence.

He also made false allegations against other neighbours.

He's a thoroughly despicable individual - not a nice person at all, I'm sure you'll agree.

When I say his name is Mr Jim Kerr, that's not actually the main title he's known by.

That's right folks. This piece of garbage is (was) an officer of Police Scotland.

And how did Police Scotland discipline him?

Instead he was allowed to 'resign'.

Which means his 'resignation' let's him keep his lump sum payment pension with an annual income of around a quarter of his current salary.

Nice to know that Police Scotland are so wonderfully generous to criminals...with our money.

http://www.dailyrecord.co.uk/news/scottish-news/cop-out-anger-after-suspended-7076665
Posted by Kenny Campbell at 11:38