Police in the north-east of Scotland are still playing around with wearing body cameras. 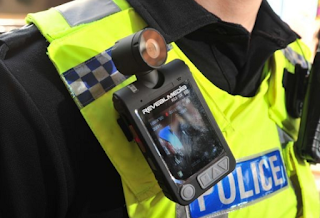 Their colleagues down in the borders tried it but didn't have much success. However further north it seems the Cecil B DeMiserable boys in blue are getting to grips with the new tech a little bit better.

I've written about police wearing body cameras before in this blog. My opinion hasn't changed.

What I am absolutely dead-set against though is the police being able to cherry pick what bits of the film they want to use afterwards for evidence purposes.

Knowing what I know about untrustworthy Police Scotland - and I have extensive experience of how they work - the wearing of body cameras will always be used for the benefit of the police, not the public. That's a cert.

So unless Police Scotland are going to give the accused or their defence solicitors complete and unrestricted access to the WHOLE film these cameras record, the video evidence from them should be inadmissible.

The video evidence should also be continuous and uncut - if there is any break between the police arriving at the scene of a crime and the arresting of the accused for that crime, it should be deemed inadmissible as evidence too.

The police officer should not be able to start and stop the camera whenever he or she likes - because we all know the way that's gonna end up.

Then and only then can the public be confident that video evidence from a police body camera hasn't been tampered with, edited, or cherry picked by police to suit their own corrupt agenda.

Because you just know that untrustworthy Police Scotland are itching to wear these body cameras purely to benefit themselves, not justice.

https://www.eveningexpress.co.uk/fp/news/local/339-body-cams-in-use-across-n-east/
Posted by Kenny Campbell at 14:01