The new Chief Constable of Scotland Phil 'Gormless' has been sworn in today.

The Scottish public are hoping he'll be a new broom and a breath of fresh air, especially after that menace-in-a-uniform Stephen 'I've got an ego as big as a' House.

He might have come in from outside Scottish policing ranks but rest assured he's cut from exactly the same cloth as the others. 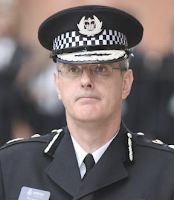 No sooner has he put one hand up to take his oath while cramming his obscenely high salary in to his pocket with the other, we now find that he previously headed the Metropolitan Police branch that controlled the notorious Special Demonstration Squad.

For those of you who haven't heard of the Special Demonstration Squad, the SDS were the undercover unit whose officers had sex with, and even fathered children with, female targets.

Any hopes that truth, decency, and honesty will follow Uncle Phil in to the Police Scotland hot seat have all but dissipated before his feet have had a chance to get under the desk.

Don't say I didn't warn you.

http://www.heraldscotland.com/news/14178774.New_chief_constable_linked_to_undercover_police__sex_spy__unit/
Posted by Kenny Campbell at 21:45