Why There Will Be No Enquiry In To Illegal Police Spying

The Justice minister has said that there will be no enquiry in to Police Scotland's illegal spying controversy. 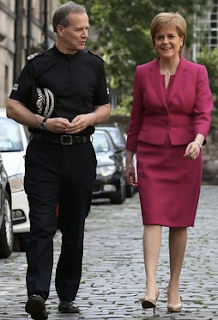 This comes on top of the recent revelations that First Minister Nicola Sturgeon knew about the spying allegations against Police Scotland for 5 months but said nothing.

Yet curiously the First Minister wasted no time publicly criticising David Cameron's Government the very minute she discovered GCHQ were illegally spying on us.

So why the difference?

The conclusion is as obvious as it is disturbing I'm afraid.

Police Scotland were spying on us in some cases for and on behalf of the Scottish Government.

Therefore the reason there will be no enquiry in to this farce is because it would be very embarrassing if the First Minister were to ask the Lord Advocate and untrustworthy Police Scotland why they conducted illegal spying on our citizens and the reply was 'because you told us to...'

https://www.commonspace.scot/articles/3046/justice-minister-dismisses-calls-for-inquiry-into-police-spies
Posted by Kenny Campbell at 12:41