Undercover Police Will Have Sex With You To Get Information 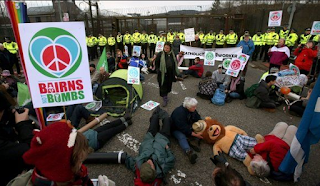 Did you know that the controversial spying unit the National Public Order Intelligence Unit which was set up to infiltrate protest groups in England has been operating in Scotland?

No, neither did I.

They kept quiet about that one.

It turns out that NPOIU police - who were caught having sexual relationships and even fathered children with members of the groups they infiltrated - have been operating here as well as in England.

Her Majesty’s Inspectorate of Constabulary have confirmed that the NPOIU did indeed operate north of the border and that Mark Kennedy, the most notorious NPOIU officer, visited Scotland over a dozen times while on duty.

Will police stop at nothing to persecute those who oppose them and their elite masters?

Have they no shame?

http://www.heraldscotland.com/news/14126896.Revealed__spying_unit_worked_with_Scottish_police/
Posted by Kenny Campbell at 14:43