In a new amendment to the criminal justice (Scotland) bill police will be able to stop and search children without any legal cause. 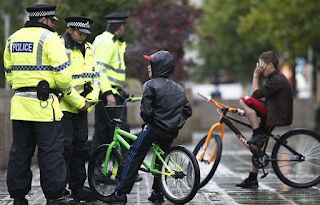 It wasn't long ago that untrustworthy Police Scotland were hauled over the coals regarding the controversial practice of stopping and searching children.

But never the type to let the law get in the way of doing what they want to do, it hasn't taken Police Scotland long to get that power back - through the back door of course.

Police Scotland will use any lying and cheating tactic to get to do whatever they want and now all they need to say that they 'suspect the child of possessing alcohol' and that lets them manipulate the law covered in the new amendment.

They now have a right, under the new bill, to stop and search our children at will.

History tells us that every time Police Scotland get new powers through new laws, they abuse those powers.

Police Scotland have already abused stop and search powers in the past and they will abuse them again. Tens of thousands of children, some as young as 7 years old, were stopped and searched. They have grown up with a poor opinion of Police Scotland.

Now our boys in blue are just about to make enemies of tens of thousands more youngsters in the next generation.

The idiots at Police Scotland just don't get it.

A whole generation of Scottish public have already grown up to hate Police Scotland.

A new generation are now set to do the same.

You reap what you sow Mr Plod.

http://www.theguardian.com/uk-news/2015/dec/07/new-scottish-stop-and-search-fears-over-clampdown-on-children-with-alcohol
Posted by Kenny Campbell at 10:08