In what has to be one of Police Scotland's daftest ideas, this years Christmas safety campaign is as useless as it is bizarre. A bit like Police Scotland themselves. 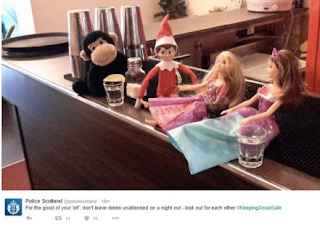 The campaign consists of a bunch of children's toys - a monkey, an elf, and a couple of barbies - shown in various 'situations' to warn us of the dangers around this time of year.

If untrustworthy Police Scotland would spend more time out in our streets investigating crimes instead of playing with stupid toys and twitter it would be far more productive.

But as everyone knows, Police Scotland are lazy.

They are supposed to investigate in to criminality and then report those crimes to the Procurator Fiscal but instead they cut corners by just taking a guess at who they think the bad guy is and then collect as much so-called evidence as they can to try and support their own ill-conceived 'opinions'.

Police officers are renown for not being particularly bright or well educated so invariably their 'opinions' turn out to be wrong and an innocent person gets arrested. They don't care though because their arrest targets and quotas have been filled.

Victims of crime this Christmas will find it anything but reassuring to know that the Police are sitting uploading pics of a bunch of toys to the internet while they wait hours, days and even weeks for Police to turn up to answer their call for help.

This is one occasion when I'd actually be happy for a change to see Police Scotland throwing their toys out their pram (and in to the nearest bin).

What a bunch of muppets.

http://www.deadlinenews.co.uk/2015/12/17/police-scotland-ridiculed-over-creepy-elf-xmas-safety-campaign/
Posted by Kenny Campbell at 12:33