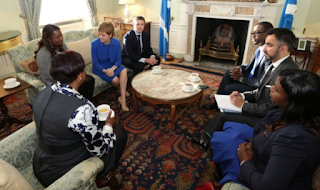 I have been following the Sheku Bayoh case with great interest.

I have personally donated to the family's cause and feel strongly about the shameless way Police Scotland continue to conduct themselves in this case.

But I don't expect the family of Sheku Bayoh to get justice anytime soon.

You see the First Minister heads the Scottish Government, who choose and appoint the Lord Advocate, who heads the Crown Office & Procurator Fiscal Service, who work hand in hand with Police Scotland to help them prosecute cases. Join the dots.

For those of you who don't already know, Sheku Bayoh was an innocent member of the public who was detained in police custody in Kircaldy. He did not leave police custody alive.

He was 31 years old and leaves behind 2 small sons aged 3 and 3 months.

No-one knows how Sheku Bayoh died except that he was taken into police custody and now he is dead. His family and friends are quite right in wanting to know why. However Police Scotland refuse to give them clear information of what occurred and requests that the Lord Advocate and the Police Investigations & Review Commissioner help them get to the truth have fallen on deaf ears.

Police Scotland gave a statement during their press conference on 14th May this year saying "we have nothing to apologise for."

One of the principal Police officers on the scene, PC Alan Paton, has a history of violent attacks, even against his own family and he has publicly stated that he hates black people. (see http://www.bbc.co.uk/news/uk-scotland-34529611)

The family were given 5 different version of what took place. One of these ‘versions’ was that Sheku Bayoh was found lying on the street, that a passer by saw him and called an ambulance. This is untrue.

Another 'version' was a statement claiming that a petite female officer, PC Nicola Short was first on the scene and alone. This is also untrue.

Mind you, she was the first to hit Sheku Bayoh with a baton although she suffered no physical injuries whatsoever.

The first officers on the scene were actually two large male officers – both over 6ft 3 in height and over 20 stone in weight (Sheku Bayoh was 5’10 and 12 stone). 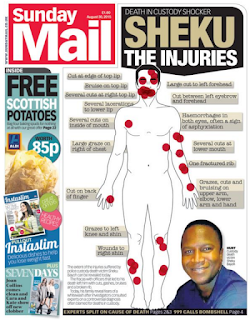 Up to 9 officers were involved and there was over 100 stone of Police officers on top of him at one point.

His injuries were horrific.

They tried to say he was carrying a knife. But he wasn't. There was no knife at the time of his arrest and no knife has ever been found. More Police lies.

And as if all that isn't enough, Police Scotland contacted the Sierra Leone embassy in London to try and sneak Sheku Bayoh's body out of the country TWO DAYS after he died and without the family's knowledge. Luckily a suspicious embassy official contacted the family because it struck him as a tad unusual for the Police, rather than the persons family, to be expatriating a body. They were right. The family knew nothing about it.

I wonder what evidence there is on Sheku Bayoh's body that Police Scotland seem so desperate to hide?

We now discover that Sir Stephen 'I've got an ego as big as a' House secretly met officers involved with Sheku Bayoh’s death in custody case BEFORE they gave statements to the investigators. What was he briefing (coaching?) them on I wonder?

A recent rally in support of Sheku Bayoh revealed that many other families in Scotland have suffered at the hands of the police.

Untrustworthy Police Scotland must be made accountable and answerable for all deaths in police custody and their buddies in the corrupt Crown office must put every one of the officers involved in the dock.

If you've read down this far please join me and take a moment to sign the petition for justice. It'll take you just a couple of seconds and it's completely free:

The family are appealing for a small donations to assist them in carrying on the campaign to achieve further success.

A £2/$5 donation from you towards campaign activities will go a long way.

It will help them in their fight because they need more than an ‘inquiry’ into this injustice.

The family have set up a crowdfunding site at:

Or you can donate directly to:

If you would prefer to make a donation in a different way, email:

and the family will be in touch with you (they have a registered charity).

And lastly, please spread the word. Ask your friends and family to sign the petition. The weight of signature support on petitions like change.org helps show the powers that be that people care and so should they.
Posted by Kenny Campbell at 23:59