In further revelations in to the exploits of untrustworthy Police Scotland, we find today that they waste an untold amount of money and resources targeting anyone who dares speak out against them or disagrees with them (ahhhh, how well I personally know and have experienced that).

They even target the good officers in their own ranks.

In the Emma Caldwell murder case, Police Scotland diverted funds and resources away from trying to catch her killer and instead used them to try and find out which Police officers and ex officers gave details of their failures in their handling of the bungled case to the Sunday Mail newspaper.

So not only do the Police spy on journalists who criticise them, they come down like a ton of bricks on any officer past or present who dares stand up for what's right and puts the truth out there.

Talk about shooting the messenger!

And it means that we, the public, are left with the dregs of humanity to run our Police force in Scotland.

A couple of days ago I discussed the shocking news that there are currently 134 Officers From Police Scotland Under Investigation For Sex offences, Stalking, Theft And Assault - many of them the rank of Sergeant and Inspector and above (see original article here)

Do you still feel safe with this current motley crew of Police Scotland in charge of our streets then? 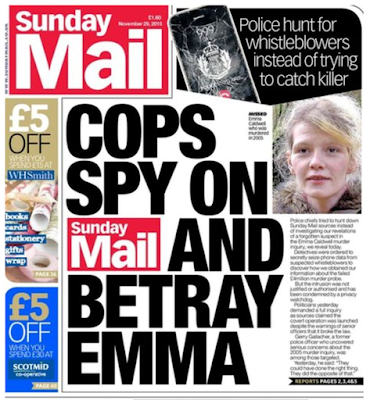