Following the BBC documentary Lies, Laws and The Bin Lorry Tragedy, the Lord Advocate Frank 'I'm anything but frank' Mulholland, head of the corrupt Crown Office & Procurator Fiscal Service, has given solid backing to his lying Procurator Fiscal David Green - and branded the families who lost loved ones in the tragedy a bunch of liars. 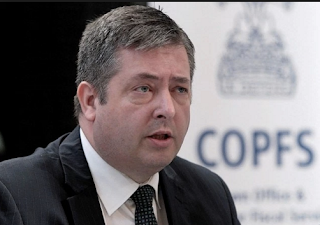 Sadly this is standard practice for the corrupt Crown office. Their arrogance knows no bounds.

Six people, including the families legal team were all present at the meeting when Procurator Fiscal David Green told them that the bin lorry driver had previously fainted in a canteen when in fact he had fainted at the wheel of a bus.

You may find it astonishing that Procurator Fiscal David Green denies he said any such thing, despite SIX people at the meeting confirming that they did indeed hear him say just that.

You may find it even more astonishing that his boss, Lord Advocate Frank Mulholland believes his PF David Green rather than the SIX witnesses (who included the families lawyers).

I made an official complaint to the Crown office and they investigated my complaint.

Their so-called "investigation" involved asking the Procurator Fiscal if she had indeed said what the witnesses in court heard her say.

She denied saying any such thing.

And so my complaint was dismissed.

The Crown Office believed their lying Procurator Fiscal rather than the members of the public in court that day who heard her lie.

So, by now you may be wondering why so many Procurator Fiscals in the Crown Office who claim to represent the public interest and work for us and for our benefit have no qualms when it comes to lying, perverting justice, and covering up corruption in their ranks (and don't even mind doing it in front of judges, under oath, and in court). What makes them so arrogant and brazen?

The answer is all down to accountability, or rather lack of it.

The Crown Office & Procurator Fiscal Service, headed by the Lord Advocate Frank Mulholland are NOT accountable to anyone so can absolutely do what they like. The Scottish Public Services Ombudsman (SPSO) which is supposed to oversee them is run by their cronies and connections so are akin to a chocolate fire guard. Not only do the Crown Office investigate themselves but they are also in a unique position of being the gatekeepers to our courts. No-one can be prosecuted in a court of law in Scotland without their say so. This even includes private prosecutions which have to be approved by the Lord Advocate before they can go ahead.

So if you don't like the version of justice that the Crown decide on, tough luck. A judge doesn't even get to hear your case unless the Crown allow it to go to court first. So they can deny you justice and there's NOTHING you can do about it. Nothing.

If Procurator Fiscals lie anywhere at any time, they can be confident that their colleagues will never put them in the dock to answer for their sins. Don't believe me? Just look at the date stamp on this post and compare it to today's date (which is possibly months or years after this post is dated). Has the lying Procurator Fiscal David Green ever stood in a dock in a court of law anywhere in Scotland charged with lying to the families of the bin lorry tragedy since I published this post? No.

That is why six witnesses at a bin lorry meeting versus one corrupt Procurator Fiscal cannot possibly win.

Thats why corrupt Procurator Fiscal David Green's version of events was unquestioningly accepted by corrupt Lord Advocate Frank Mulholland and the six witnesses, including the families lawyers, have been branded as the liars. They did exactly the same to me.

That's why the families of the bin lorry tragedy will never receive justice from this corrupt Crown Office & Procurator Fiscal Service.

If you are a member of the public and thinking of helping the Crown by going to court as a witness in any case, no matter how big or small, think again. You need to be aware that you could actually be helping corruption, you could be defeating justice rather than getting justice.

Worst of all you could be helping perverted Procurator Fiscals in the corrupt Crown Office put an innocent person or persons behind bars.
Posted by Kenny Campbell at 13:50