The chief Constable of Police Scotland Sir Stephen "I've got an ego as big as a" House has failed to turn up for a string of important meetings since announcing in August that he is to retire. 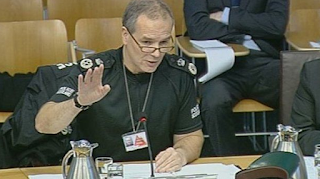 He failed to turn up at the Scottish Police Authority meeting to account for and answer to a £25m overspend in the Police Scotland budget.

He failed to turn up to a domestic violence summit. Not surprising as he has thrown countless innocents in jail on trumped up domestic abuse charges with his "guilty till proved innocent" attitude. We all know that Sir Stephen has never been the type of person to let a little thing like 'the law' get in the way of him doing whatever he likes.

He failed to turn up to any meetings with the Scottish justice secretary since announcing his impending retirement.

He failed to answer to the results of a force-wide survey which showed a worrying percentage of his police officers are dissatisfied with their job.

He failed to answer to the furore about police response times after the M9 tragedy (which he is entirely responsible for).

That's a lot of failures.

And he doesn't give two hoots.

Such is the lack of substance of the man that he, yet again, treats the public with complete contempt just as he has done every day during his tenure at untrustworthy Police Scotland. Don't expect him to work hard during his 3 month notice period, but do expect him to bunk off and put his feet up while still pocketing the obscene amount of money we pay him. I bet when he was a wee boy he brought games in to school and did no work for the last week before the summer holidays.

The man is a menace in a uniform and the people of Scotland are far better of without him. Sir Stephen House is a pathetic individual, devoid of all moral worth and should be stripped of his knighthood for wreaking havoc on the innocent people of Scotland with his vindictive target based policing policy which has caused misery to countless law abiding Scottish citizens. He has single handedly set this great country of ours back decades.

He will most certainly NOT be missed.

Shut the door behind you Sir Stephen.

But just before you go, I wonder if you'll be giving back any of the £208,000 a year you pocketed from us for your failures?

What did you say?

I can't hear you, speak up?