Oh dear, untrustworthy Police Scotland have been caught red handed breaking the strict rules they should follow when spying on us. 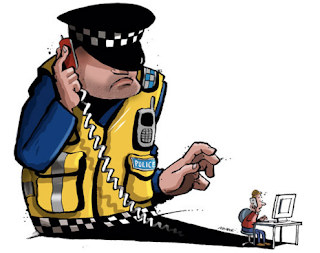 I suppose we shouldn't be surprised that Police Scotland go around completely ignoring the law as if it doesn't apply to them.

After all, half the Police I come in to contact with think they know the law (and they don't) while the other half think they are the law (which they're not).

The Interception of Communications Commissioner found that Police Scotland obtained data communications without getting the approval of a judge not once, not twice, not three times, not four times, but FIVE times.

What flabbergasts me most is the boys in blue's response when confronted about being caught breaking the law. Assistant Chief Constable Ruaraidh Nicolson said there was no evidence that the breaches had not been "an intentional act".

Oh, good, now you've explained it Mr Nicolson that makes everything fine then doesn't it?

Let's put the shoe on the other foot.

If you happen to break the law by, say, stabbing someone FIVE times, what's your chances of telling the coppers who come to arrest you that it was "not an intentional act"?

You don't need Ladbrokes to give you odds on that one.
Posted by Kenny Campbell at 19:00