Police Scotland Admit Speed Cameras Are For Revenue, Not Safety

With more than 500 speed cameras in Scotland, untrustworthy Police Scotland have finally admitted what motorists have known for years...they use speed cameras against us to make money, not to stop accidents. 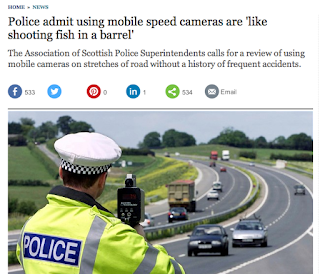 ASPS (The Association of Scottish Police Superintendents) have admitted that the familiar sight of police camera vans parked on top of bridges above the motorway are more likely to make them money than actually save lives.

Full marks to Chief Superintendent David O'Connor for spilling the beans on this and calling for a review in to how Police Scotland use speed cameras.

But it's still too little too late.

Millions of otherwise law abiding citizens already hate Police Scotland because they have made them in to criminals.

One 72 year old man I spoke to who had never been in any trouble in his life, ever, says he now has no respect for Police Scotland after they made him in to a criminal for a minor speed camera offence. He is adamant he will never help the Police, will turn a blind eye to any crimes he sees, and will never go to court as a witness if Police ever ask him to.

Police Scotland are so arrogant that they don't seem to realise or care that they are turning people against them.

Wake up Police Scotland. You can't turn otherwise decent honest people in to criminals, fleece them for speed camera revenue, cause them to incur higher insurance premiums by inflicting points on their licence...then expect them to help you when you need them!

http://www.telegraph.co.uk/news/10656510/Police-admit-using-mobile-speed-cameras-are-like-shooting-fish-in-a-barrel.html
Posted by Kenny Campbell at 01:21