No Breaking In To Your Duty Free 'Swally' On The Plane

Glasgow Airport have announced that they are to sell duty free booze in sealed bags so that passengers cannot consume it on board the aircraft.

Airport bosses are bringing in these measures (no pun intended) in an attempt to help stop drunken passengers getting out of hand and disrupting flights.

Of course the fact that I'm tee-total and don't drink alcohol perhaps also suggests that I'm not entirely unbiased in this matter lol!

But rest assured, there was a time, many moons ago, in a century far, far away, when I did drink. And I can tell you that my holiday, just like many other Glaswegians holidays, began as soon as I hit the bar at Glasgow airport - even if it was 6 in the morning. The minute I passed through the airport security metal detector I was like a ship that had entered international waters. I considered myself officially in the international time zone - even though I was still in Glasgow and it was still 6 in the morning! 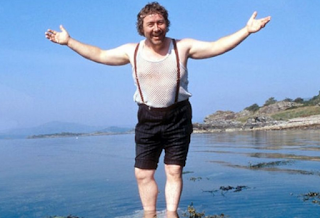 Let's face it, Glaswegians, especially on the Palma and Alicante flights, are often already three sheets to the wind before they get to the airport never mind step foot on the plane.

I'm unconvinced that restricting access to a couple of bottles they picked up while strolling through the duty free shop on their way to the departure lounge bar is going to make much of a dent in the behaviour of these diehards.

Worse still is how are the cabin crew going to enforce the ban?

As soon as 'Chantelle' and 'Kylie' have closed all the overhead lockers and finished doing the safety dance pointing out where the exits are, the next job on their list is to wheel the drinks trolley down the aisle.

And as soon as they try to charge an already half-jaked Glesga punter and his burd nearly a tenner for two silly wee bottles of cheap vino with not much more than a mouthful in each, the Rab C Nesbits of the skies will be smashing the planes porthole and hanging on to the wings trying to get in to the luggage hold to get their duty free oot.

And when that happens, someone breaking a seal on a plastic bag with a litre of Bacardi in it will be the least of your problems!
Posted by Kenny Campbell at 10:42