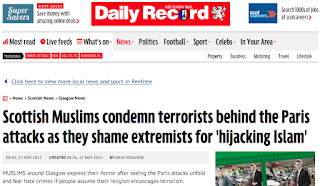 In the article he says that the terrorists are attempting to hijack the Muslim religion and have no connection to Islam. He also goes on to say "I love Glasgow, I was born and brought up here, it's my home."

Not only is he correct, but his sentiments are exactly in line with what I regularly hear from other Muslims I know and talk to in Glasgow. And it's pretty much what you'll hear from every Muslim you talk to.

The problem is that our leaders in the western world fail to get it. They listen to Muslims like Abdul, but fail to listen to our enemies, the extremists. In order to defeat your enemy you need to know who your enemy is, why they're fighting you, and what their goals are. If you don't know that, you will struggle to defeat your enemy.

Yet our enemy is very clear about why they are attacking us and what they want. Our leaders just aren't listening.

It frustrates me when I continually hear western Prime Minsters and Presidents peddle that same old tired story saying that the extremists attack us because they HATE our way of life, HATE our democracy, HATE our free elections, HATE that we have women in the workplace, HATE that female children can have an education ad nauseum.

This is simply not true.

There are nearly 3 million Muslims living in Britain and Scotland's Muslim population is around 80,000. They have chosen to make Britain their home because they LOVE our democracy, they LOVE that we have free elections, they LOVE the fact that Muslim women can go to work, they LOVE that their little girls can go to school and get an education.

They do not hate our freedoms and our way of life.

And neither do the extremists.

What the extremists do hate is our foreign policy. They hate that we interfere in their world.

They attack us because we invade their countries, kill their citizens, and steal their oil.

They attack us because we prop up tyrant Kings and dictator Presidents in Arab countries who torture, kill, and brutalise them.

They attack us because we try to force our version of democracy on their countries with no understanding that their religion precludes them from accepting our version of democracy. In our western world, religion and the state are separate, but in the Muslim world they are intertwined (state law is the religious Sharia law). When you ask a Muslim to separate his religion from his government, the way he sees it, you're asking him to turn his back on God.

They attack us because of our unquestioning blanket support for Israel and the brutality they see Israel inflicting on the Palestinian people.

If you read western newspapers and watch the news on TV you could be forgiven for thinking that Britain is somehow under siege and we are a short step away from being taken over by "the Muslims" who want to impose their culture and laws on us and change our British way of life. This is complete and utter nonesense.

The atrocities in Paris last week were horrendous acts of pure evil. I hope every last one of the perpetrators of these sickening indiscriminate attacks are hunted down like the animals they are. I hope they spend the rest of their pathetic lives behind the door of a prison cell and never see the light of day again. And even that's too good for the vile cowards.

But we also need to wake up to the harsh reality that as long as our government maintains this reckless policy of intervention in foreign countries, we will always face a backlash from those who don't take too kindly to us poking our noses into places where we have no business being.

Our country gains no major economic or military benefits from supporting any of these middle eastern dictatorships or from invading any of these middle eastern countries. On the contrary, it costs us dearly, militarily and economically. These countries pose no threat to our security, not in Mr Blairs 45 minutes, nor at any other time. What people do in their own countries is their own business. It's none of ours. We are not, cannot be, and should not be, the worlds policeman.

There is nothing in any of these middle eastern countries that is worth the blood of one single British citizen.

There is nothing in any of these middle eastern countries that is worth the blood of a single one of our brave service men and women in uniform.

Pull our military out of the middle east now and leave these countries to govern themselves in whichever way they want. If they want to kill each other, let them.

The politics between the rival factions in this region are extremely complex. The religious and civil wars they wage on each other are not pretty. Stop pretending we can do anything to help make it better. We can't. The middle east is a mess and our interventions so far have only made things worse for them and for us.

And while you're at it, don't be afraid to speak up anytime and anywhere you hear someone falsely attempting to associate the wonderful Muslim communities who live here in our country with the extremist violence we're suffering as a direct result of what our government is doing in the middle east.
Posted by Kenny Campbell at 22:53