Watch out Glasgow, big brother is watching and he wants your money. 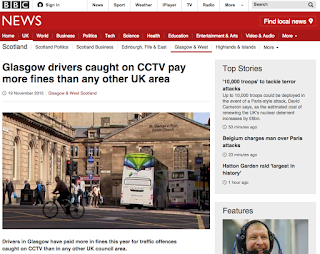 You could be forgiven for thinking that the CCTV cameras you see around Glasgow are there to help keep you safe in an increasingly violent world.

Glasgow City Council has 15 CCTV cameras operating but they're not there to protect you from being robbed, mugged, raped, or murdered.

The CCTV cameras are set up to catch unsuspecting motorists who are unaware that big brother is watching. They exist purely to catch you and fine you an obscene amount of money for minor traffic infringements like:

- Being caught in traffic on a yellow box junction

- Driving in a bus lane a minute after the permitted time

Glasgow City Council has made £4m so far this year from motorists caught on their CCTV system and £11m since 2013.

It's now official that Glasgow City Council has fined motorists more money than any other council in the whole of the UK. 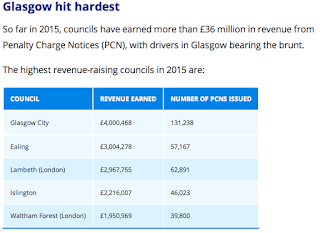 There is some good news though.


The corrupt council leaders at Glasgow Crooked Council have lived very well indeed off your £4m this year and look forward to you funding their jolly junkets with another £4m plus of your hard earned cash next year too.

Oh and don't expect any of them to be contributing to the millions they collect in fines from you because they don't drive their cars in Glasgow. Instead they take taxis everywhere - paid for from the millions they fleece off you.