Her Majesty's Inspectorate of Constabulary has come up with 30 recommendations for Police Scotland on how they need to improve. 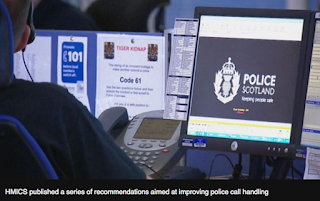 Thats a heck of a lot of recommendations.

It shouldn't be surprising to anyone that the Inspectorate of Constabulary found so much wrong with untrustworthy Police Scotland. After all, we have all been shocked to the core by the M9 tragedy where police left John Yuill and Lamarra Bell to die despite their crashed car being reported to police earlier.

Except that the M9 tragedy was not actually covered in the 30 recommendations. It is being investigated by another body - the Police Investigations and Review Commissioner.

So let's get this straight. These 30 recommendations on how police need to shape up are in addition to their failures in the M9 tragedy!

The merging of regional police forces in to one big central Police Scotland force was an experiment that has now proved itself to be an epic failure.

We've got rid of Sir Stephen "I've got an ego as big as a" House.

Now it's time to get rid of Police Scotland too.