I grew up watching Yes Minister and subsequently Yes Prime Minister. It was so quick witted and sharp it was a joy to watch and essential viewing. 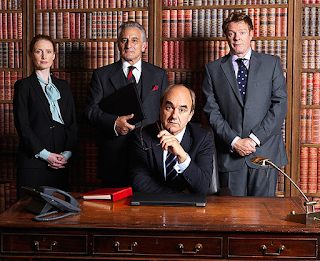 So, with bated breath and great anticipation I recently sat down in front of my TV, mug of tea in one hand and an empire biscuit in the other, ready to be transported back to those good old days of Sir Humphrey and Jim Hacker jostling to be top dog in the political kennels.

I've now watched two episodes and...well...I can't make my mind up whether I like it or not.

What confuses me is that the characters and script writers are the same. The new actors are excellent and Antony Jay and Jonathan Lynns scripts are as witty as ever.

But for some reason it's just not working for me. It seems there are others of the same mind and the critics are having a field day panning the new series:

I've now figured out that it's actually nothing to do with the actors or the scripts.

Maybe they should have made this new series a radio show and employed Rory Bremner and Alistair McGowan to provide the voices?
Posted by Kenny Campbell at 22:15