Why We Won't Invade North Korea

North Korea looks set to suffer from another round of UN sanctions shortly unless it gives up its nuclear weapons program. 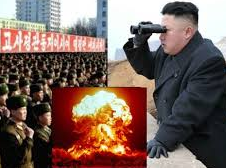 Insiders say that the tin-pot dictatorship would be willing to give up their nuclear capability if the West, particularly the US, agree not to invade or attack them.

If the West want to throw in the offer of a bit of financial aid that would sweeten the deal too.

But hang on Kim Jung Un. Before you give up your nukes and get your nappies in a twist, think about this for a moment.

I reckon the West will never invade you in North Korea because:

2. You DO have a nuclear bomb

Iran, on the other hand, DON'T have a nuclear bomb and DO have oil.

Hold on to your hat Ayatollah!
Posted by Kenny Campbell at 02:41