So, a British grandmother may face a firing squad for smuggling nearly 5 kilos of cocaine in to Bali:

Seems the British government is up in arms and the Foreign office are objecting strongly to the death sentence.

Amnesty International have described her sentence as "cruel".

The quantity of drugs she was caught with had a street value of around £1.6 million. That's a lot of one-gram bags. 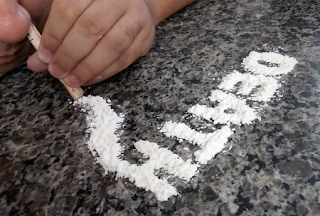 Most drug dealers like to delude themselves by claiming that they are simply satisfying a demand. They churn out the same well-worn phrase over and over again. "Don't blame me Guv, if the addicts didn't buy it, we wouldn't sell it...".

However addiction often ends in death for the user. It's not a nice death either.

Before the addict dies of their addiction they usually go through a dark prolonged period of mental torment as the addiction grows and the habit becomes harder to break.

The addict will go through months, often years, of pain and misery as they see everything they cherished in life slowly disappear - their friends, their posessions, their job, and finally their life.

Death by addiction is one of the slowest, cruelest, most horrible ways to die.

Death by firing squad is much quicker and less painful.
Posted by Kenny Campbell at 19:09